Nerd-girl pin-up of the month - April 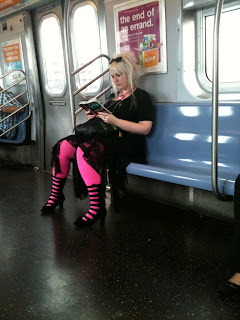 A young woman on the train. Bleached blond hair with long strands in front, short and messy in the back, long, long feather earrings that also look like hair. Checkerboard sunglasses perched on her head. She's voluptuous, not thin - she wears all black except for hot pink tights, and a big, pink plastic cameo around her neck. A small key hangs down from somewhere and is resting on her breast. There's lace around the bottom of her skirt and she's wearing high, black, peek-a-boo, button up heels with a black bow in front. Her perfectly manicured nails are tipped with hot pink and gold. She wears little make-up upon her pale, pale skin, but her lips are flushed with pink. She carries a black back with green zippers and she's reading Neil Gaiman's Neverwhere. I proclaim her nerd-girl pin-up of the month.
Posted by Georgina at 5:00 PM 1 comments 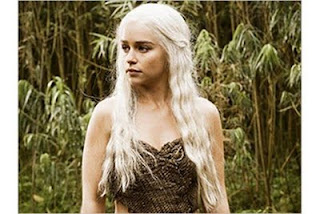 Saw the first episode of Game of Thrones today with my husband and 19 year old son. Oh, it was a nerd-fest. A nerd-fest for extremely horny nerds. My husband said he'd read the book by George R. R. Martin and didn't remember all the sex. Geez, there was a lot of sex, but I guess that's what's required of anything on HBO. They probably figure as long as they CAN include lots of sex and violence, they might as well. Let me just say that we've watched all manner of R-rated movies with our son since he's been of an appropriate age, and we don't get easily embarrassed, but I did not feeling comfortable watching the blatant boink-fest with my child. That's all I really have to say about it. Overall, I can't say that I recommend it, though perhaps the more hard-core nerd-girls will appreciate it more than I did.
Posted by Georgina at 4:52 PM 0 comments

Fly On The Wall by †Donner Social†

Fly on The Wall by Donnersocial

For show dates and more music by †donner social† head over to
http://www.myspace.com/donnersocial and we will keep you all updated in regards to new releases and shows.
Posted by Anonymous at 6:14 PM 3 comments 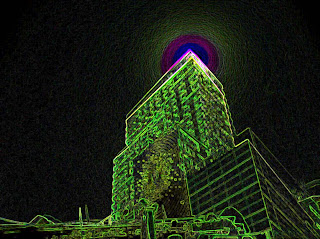 Blinking into the sudden darkness, Parker began to explore. Sleepers lined the gigantic interior. Row after row of bodies, all interconnected to the pulsing central column from which the substance of their dream/lives emanated. As one, the sleepers rolled right, then left. As one they shifted their heads, together - a brief upward thrust of the chin, in a gesture of apparent acknowledgement to an unknown thought, and took a breath. Like a soft wind that single breath stirred the air. The hairs at the back of Vic's neck stood alert. Moving through the rows he looked carefully at faces, each unique, yet a vague similarity of expression masked their humanity. Together the sleepers turned again, a complete roll this time.

The bodies must not be allowed to atrophy, being as they are, unattended in real time by their occupants. They are never allowed to be in the same position for too long. It is written into the covenant. The exchange has need of being complete, and a satisfactory all encompassing illusion was after all, a large part of the experience. Looking carefully at each face as he moved along the rows, hoping desperately to recognize a friend, known or unknown.

It would not matter.

As he moved on he carelessly brushed against an out-thrust hand. The room immediately exploded into a cacophony of desperate turmoil.

Shrieks cut the echoing cavern like glass knives, "Interloper! Fraud! Not one of us! Out!"

In unison the sleepers awoke, deeply agitated and angry at being ripped into the real world.

One weeping, hysterical woman near to him bit down hard on his arm, and the rest were driven into a blood-lust of frantic activity, pushed into a frenzy by the program fighting to regain control, seeking to bring him down. In the midst of the tumult he leaned in to the nearest ear and whispered, "Remember who you are. You are alive. Rejoice!" and was rewarded with a look of stunned recognition.

The newly awakened person leaned to the next and spoke the words of awakening programmed into every soul in the room. Tubes, cords, wiring and all manner of input device applications were ripped from torsos, legs and arms. Silence was the theme until laughter boiled to the surface and rapidly washed through the crowd. Making them whole. Bringing them to the present. The transformation spread through the room, and only one or two were left continuing barks and empty threats shouted to no one.

Heartened, Parker strode to the door and beckoned to them as he began to open it once again, "come along with me," he called loudly.

His call was met with only silence and stares.

The word, "no!" rang out once from a far corner, twice, three times and then in a thunderous wave, a din of negative agreement. "NO!"

Heads turned right and left, first in individual motion, and then slowly that motion resolved itself in to a unified movement. People who had gotten to their feet moved once again to the security of the beds and began to reattach to the core, to suckle at the breast of dreamsource . Together they reclined. Together they breathed in...out and, then...together they - slept - again.

Of the world but no longer in it.

Returning once again from whence they came, nowhere.

Parker, befuddled by the experience only shrugged, open the door and stepped back out into the light of the real world.

NOTE: The events depicted in this story are fictitious. Any similarity to any person living or dead is merely coincidental. No inference is intended as to persons involved in prior discussions. No insult is intended to any persons. This is a story, and nothing more. This is not a promo.

My Amazon author page if you have any interest is http://www.amazon.com/Jonathan-Ellis/e/B004OY6QM4

Do what you love.

By Way Of Explanation:
A few days ago I attempted to promote my book on the Amazon Discussion Boards, and was met with a dizzying riot of annoyance by members of the board.. It was like stepping into the Old West. Really, it turned out that I had indeed broken some unspoken law that this board was not a place to self promote. Ah well... What did I come away with? A few bruises, and the following story which I've now posted on the the very same Kindle Book Community board under the title, "My Weight Control Book Makes A Difference - I Want To Promote It, But The Last Time I Did That On These Boards A Cry Of Foul Went Out Across The Land.-) Inspiration Comes From Many Sources." Cool, it turns out that that's a link. It's only a link to the same story that follows above, but anyone commenting - if you can - please do so in both places . Why you ask?  Because it amuses me.

This entire post is also posted on ificanloseit.blogspot.com
Posted by Jonathan Ellis at 1:32 PM 0 comments

Let's Face It, Nerd-Girls are Sexy!

You probably just now googled "Sexy Girls" and came up with this post. WAIT! Before you click away, hear me out. I'm the first guest to share on this blog, the first dude. What I want to say, and I think you'll agree, is that there's something in us guys that finds the smart girl very enticing - that she might be smarter than we are is even more of a turn-on. Think of the librarian: a little lonely, a little repressed, just waiting for the right man to push the button that turns her into a tigress. Or the authoritarian school teacher. Did you ever fantasize that she'd keep you after school to "punish" you? What about the lady scientist, alone in the lab, who suddenly whips off her thick glasses to reveal an alluring genius (kind of like Sandra Bullock in the movie Love Potion Number Nine).

If you're lucky enough, like me, to be married to one of these goddesses, you really know what I'm talking about. My wife is a writer, a teacher, a speaker of many languages, a Shakespeare buff...was even on stage, and played one of Shakespeare's most alluring temptresses, Rosalind, from As You Like It. My wife is the best kind of nerd-girl: sexy and smart all at once. Smarter than me? Oh yeah.

By the way, if you are a dude, you might just impress a nerd-girl by giving her the gift of one of my wife's clever time-travel novels (ebook form or print) wherein a smart, beautiful woman, (loosely based on my wife Georgina as you might have guessed) visits first Jane Austen's England in The Time Baroness and then pre-Civil War New York City in The Time Heiress.  Both are fun, intelligent, and a little sexy.

If you're an actual nerd-girl reading this, all hail to you! I don't need to convince you to check these books out!

(And by the way, if you happen to be slightly over-weight, as often nerds or nerd-girl lovers are, here's how I slimmed down: "If I Can Lose It... A Middle Aged Tech-Fanatic's Extraordinary Journey & Guide-Book For Losing Weight" Sorry, just had to plug my own book :)
Posted by Jonathan Ellis at 8:16 AM 0 comments

Email ThisBlogThis!Share to TwitterShare to FacebookShare to Pinterest
Labels: 1853, as you like it, Civil War, if i can lose it, Jane Austen, jonathan ellis, love potion number nine, nerd-girls, NYC, Rosalind, Sandra Bullock, sexy, shakespeare, the time baroness, The Time Heiress, Tina Fey

Why Did I Write It?

Why did I write The Time Baroness, my first novel, "a romantic, time-travel adventure set in Jane Austen's England?" (please excuse the blurb) Because, like any nerd-girl, I don't want to just read Jane Austen, I want to experience her world. I want to go there and be a part of it all. But how can I do that? There's only so many times I can watch each and every movie, both BBC and Hollywood made, of each and every novel, even though there's essentially no limit to how many times I can read each and every novel.

Yet it still wasn't enough. So I wrote a story in which the main character is loosely based on me, albeit a much more beautiful and talented version of me, and in which she does all the things I would do if I could: time travel to Jane Austen's time in the guise of a wealthy and independent woman, set up house in a lovely mansion in the countryside of Hampshire, get to know the neighbors, spend my time playing beautiful music on the piano because of course in this reality I'm a virtuoso, accidentally run into a hot violinist, have a wild affair, and just when I think everything is just perfect, bang! something happens to send me into a spin and takes me on a wild adventure.

Even though the four-year process of writing this book and working with an editor to make it as perfect as it could be was a painstaking process, it was a joy, nevertheless. It was my fantasy come true and I would live in it all the time if it were possible to do so. But since I can't, I hope my readers will have fun living there for awhile. So now I'll shamelessly post a link to my website where you all can read an excerpt or click on the link to buy it for the minuscule amount of .99 cents, as well as the Amazon link (sorry, it's only in e-book form).