The best selling time travel series, Outlander, by Diana Gabaldon, has just been made into a Starz series. I was interested in finding out what blogger Georgina Young-Ellis, of Nerd-Girls, Romantics, and Time-Travelers, has to say about it all. Georgina also writes The Time Mistress series, three, soon to be four, romantic, time travel novels. 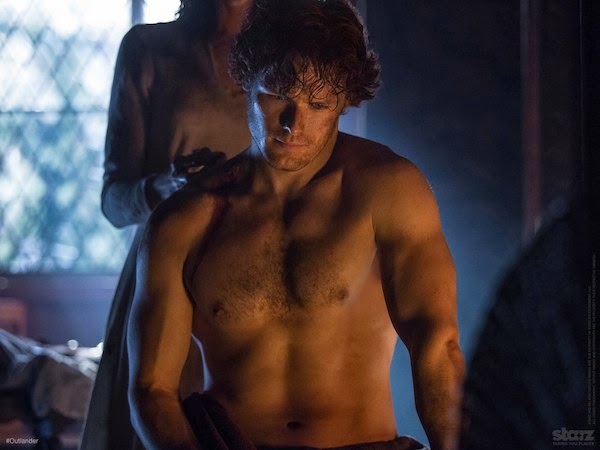 First of all, Georgina, have you seen the Starz series?

I’ve seen the first three episodes and am eagerly anticipating the fourth. So far, this television series focuses only on the first book, Outlander. There are several more books that follow it, of different titles, but I’ve only read the first. I’m re-reading it now, as a matter of fact.

So, what do you think of the TV series, and how does it compare to the book?

I have to say, it follows the book in great detail. And that’s the thing about Gabaldon’s writing, it’s very detailed. So, to skim over things too much would be a disappointment. It seems like the makers of the TV series are taking their time and getting all the historical features right. The acting is excellent, the dialogue mostly right from the book, and the quality of the film-making fantastic overall. I almost want to say I’m enjoying it more than the book, but Gabaldon still gets the credit for that, because she’s the consultant for the show.

Could you give us a glimpse into the story?

Sure. Basically, it’s about a British woman, Claire Randall, who is on a second honeymoon with her husband, post WW II, in the Scottish Highlands. They are reconnecting after having been separated for most of the war. She’s a nurse and he’s been working in intelligence―but he’s really a historian, and he’s brought her along as he pokes into all these historical places near Inverness. While exploring an ancient druid structure, she stumbles into a rent in time that pops her 200 years into the past, into the middle of a skirmish between British Redcoat troupes and Scottish rebels. The Scots rescue her from the clutches of the evil Captain Randall, an ancestor of her own husband, Frank Randall. After that, you have to see for yourself because it gets very interesting. 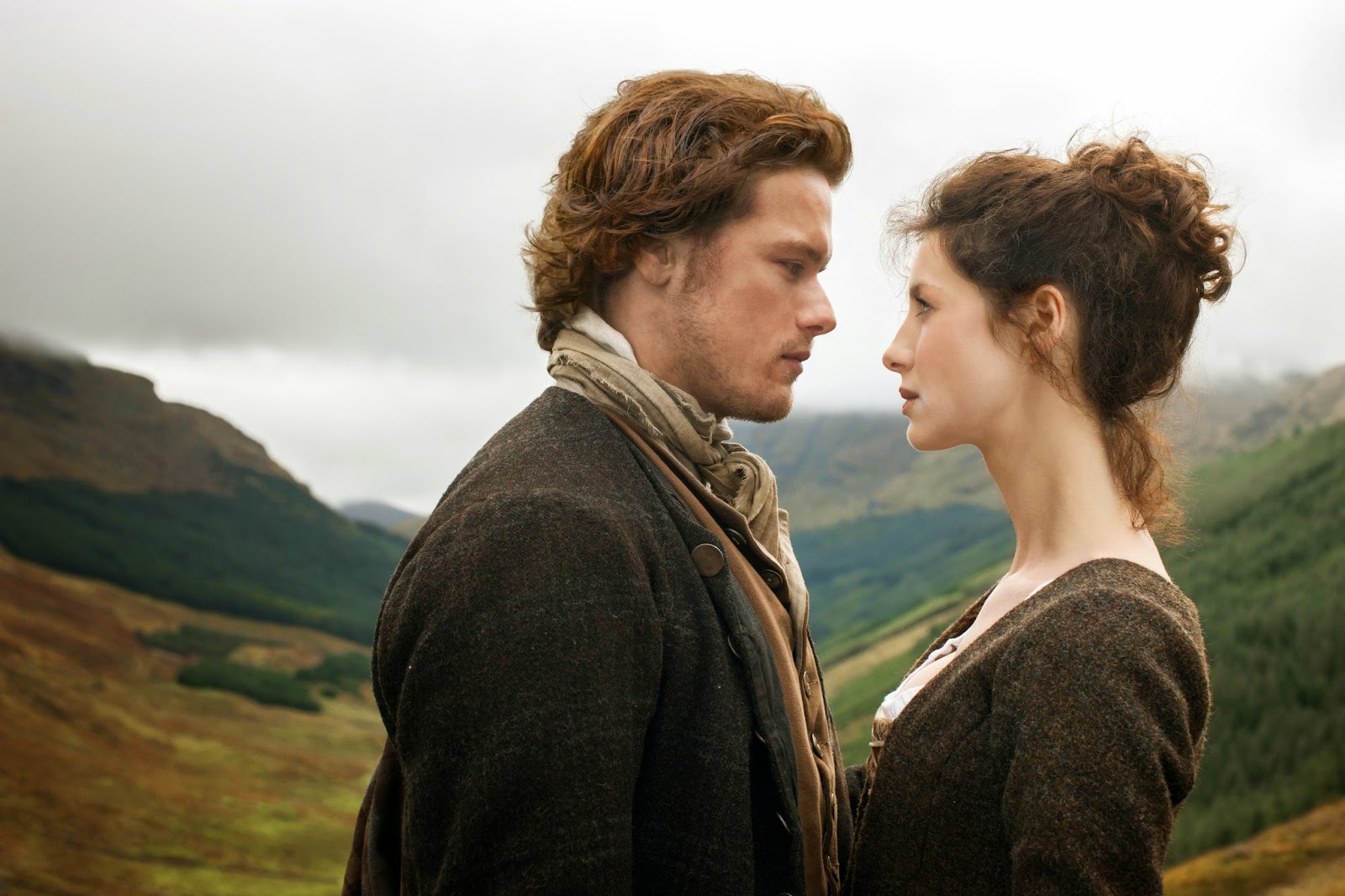 The previews I’ve seen look rather sexy. Is Outlander a bit of a bodice-ripper?

I wouldn’t categorize it as that, though some of the reviews I’ve read of the book do. It’s far more subtle than that. Gabaldon is a writer of the highest caliber, something you don’t always get in a true bodice-ripper. It is very sexy however, and gets more so as the book progresses. Still, there’s something that disturbs me about the story that I wish Gabaldon could have handled differently. Without issuing a spoiler alert exactly, let me just say that there is a very, very graphic and long description of male rape that dumbfounded me when I first read the book. For a long time, I felt negatively about Outlander as a result. I felt the author had sprung that on me and I was scarred by it. Now I realize Gabaldon needed a cathartic event at that point in the story, something that changed the character’s lives. I’d just rather she would have chosen something else. There’s also a scene wherein a woman is beaten and comes to see it as something she, on some level, deserved. I’m afraid that some women may be disturbed by that situation, especially those who have dealt with abuse in their own lives. I think it’s fair warning for readers to know those scenes are there. I, for one, skipped over the male rape scene this time around and I don’t think you’d miss that much to do so.

Did this make you hesitate to watch the Starz series?

A little bit. But I was curious to see how they handled the translation from book to film in general. So far, I’m really enjoying it, though it’s not nearly as action-packed as something like Game of Thrones, of which, by the way, I’m not a fan, specifically because of the sexual violence.

Aside from the violent aspects, would you say Outlander is steamier, or less steamy than your books?

I’d have to say Gabaldon’s are steamier. Like me, she doesn’t get too graphic (at least when it comes to the male/female sex), but I think there’s more of it in her book.

Can you compare the time travel element in Outlander and your books?

Thanks! So, I’ve been hearing some tidbits about the fourth book in your series. How close to being finished is it, and can you tell us a little bit about the story?

Optimistically, I’d say it’s about four months out. Maybe six. I’m not one of those authors that can knock a book out in just a few months, and I think you’re the same, Matt. Especially because this fourth book is requiring such extensive research. It’s called The Time Duchess, and it takes place in Elizabethan England. I always thought I knew my stuff when it came to that era, but I’m realizing there’s a lot I don’t know, so I’m reading, and re-reading book after book on the time period: stuff about Shakespeare, Queen Elizabeth, London, and of course what people wore, ate, how they lived, how they spoke, etc. It’s extremely specific.

Can you give us a hint about the plot?

Okay, here’s the official blurb for now, though I’m sure it will change over time: “‘I think I may have killed Shakespeare:’ the words that plunge Dr. Cassandra Reilly into a perilous time travel journey to Elizabethan England. Her son James has been attempting to solve the mystery of whether the greatest playwright of all time actually wrote the words attributed to him, but a vicious animosity between him and the Bard have forced her take on the challenge herself. As she investigates, she becomes intimate with the key players: Shakespeare and his troupe, Queen Elizabeth, Ben Jonson, Robert Cecil, and the Earl of Oxford. Navigating the dangers that lie around every corner of London, as well as the whims of the unpredictable queen, make it a harrowing undertaking, especially when more than one of the men the time traveler meets becomes intent on wooing her, and a mysterious presence seems to be stalking her.”

Sounds really interesting. I think all your readers are looking forward to it.

Sorry to turn things around for a second, but since we’ve moved off the topic of Outlander for now, what’s your next project, Matt?

Thanks for asking, Georgina. My real focus right now is on my job as a teacher, so I'm writing slowly. Fortunately, however, at the end of the summer, I got a lot of work done on a collaboration with one of your fellow contributors to How to Write Dialogue. If you like, I'd be glad to have your blog be one of the first to announce this new project when it's ready! May I come back? Oh, and by the way, I STILL urge you to write a time-travel book featuring the Austrian Empress Sissi -- a perfect counterpart for Cassandra, in my humble opinion. Please tell me you'll consider it?

I'd love to be among the first to announce the project! And I will consider your suggestion. After all, there is an Austrian connection in The Time Duchess, so it may make perfect sense.

Again, thanks for the interview -- it's been a pleasure as always.

Posted by Georgina at 2:49 PM 1 comments

I spent the summer falling in love again. All winter long, my lover endlessly betrayed me. There were long, cold days in which I felt only inches from complete despair. Icicles grew on my heart like stalactites. I was stuck in a terrible cycle of frigid sadness, waiting and waiting for some glimmer of hope from my dear love, some sign that the misery would end and we would once again experience the joy of renewal. No! My lover said to me over and over, you must endure pain in order to have gladness, feel agony in order to find elation, experience blackest midnight before the dawn of hope.

Finally the ice melted, the sun came out, and my lover, New York City, rewarded me with the most sublime summer anyone in recent memory could recall. A summer as mild as sweet as the winter had been terrible and cruel. The worst winter in decades followed by the loveliest summer I've ever known in this Master which is my city, the shaper of my destiny, my dear love and my sometimes foe.

I had braced myself for as searing a summer as the winter had been brutally cold. Planned my escape to some cool and refreshing clime. But the heat never came. We had, perhaps, four days when the temperature hit 90, but not enough of them in a row to constitute a heat wave. Nearly every day dawned mild and breezy: 82 degrees, crystal blue skies, dry breezes. Enough rain to make the flowers and grass flourish. And then more sunny days and balmy nights. We went swing dancing outdoors at Lincoln Center and barely broke a sweat. The Fourth of July required a light jacket. We dozed on the beach at Coney Island in perfect comfort. I opened my arms to my beautiful city, bathed in delight, and received its kisses, its embraces, its repentance. It said to me, "Forgive me, my darling, for the suffering you endured at my hands. To show you how much I care for you, I will reward you now with my bounty, my beauty." And so I did not leave. I canceled any plans to go away. As August wore on and school started in other parts of the country, the tourists fled and the town was ours alone. All the happiness I needed was right here.

Now, as summer draws to a close and what is usually the best season in New York, autumn, comes upon us in all its glory, I pray that when the winter solstice follows, bleak and forboding, when the short, dark days are upon us, and when the north winds blow, my lover will remember the sweet carresses of summer and will not desert me again. I pray he will spare me the punishment of the previous winter, and show me how kind and how dear he can truly be. Please, New York, be faithful, be true.
Posted by Georgina at 1:54 PM 0 comments