Everyone Loves a Free Sample! Elizabeth, Darcy, and Me - Chapter One

I thought I'd give everyone a little taste of what all the fuss is about. Please enjoy Chapter One from my first Pride and Prejudice Variation novel, Elizabeth, Darcy, and Me. 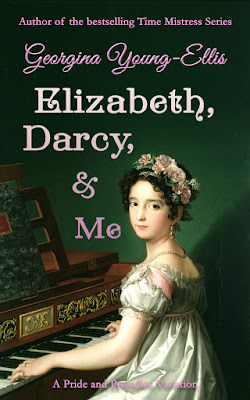 “How does my lady tonight?” Mr. Charles Bingley asked me, stroking the muzzle of his jet black mare, Camilla. He had come to the stables after an evening out among society. I’ve noticed he sometimes does this as a way of seeking solace, and though I am only his groom, he occasionally speaks to me in confidence.
“She is very well, sir. She only wants you and a little exercise to make her happy.”
“If only the human sort of females were so easy to understand.”
I studied his face. His reddish-blond hair was lit almost like a halo in the glow of the lamp hanging from a rafter above his head, yet it cast a somber shadow over his lowered eyelids. His normally smiling mouth was ever so slightly downturned. “What do you mean, sir?”
He sighed deeply. “Oh, nothing. It is just that…though I do not find it difficult to converse with women, I find that I am not often able to say anything…weighty enough to impress them. My friendships with ladies are unsatisfying to me, and mine to them too, I get the impression. I wish I could find someone who would be contented with a simple fellow such as I.”
“I would hardly call you a simple fellow,” I replied, handing him a carrot from a nearby bucket so that he could feed it to his mare. “You are educated at the highest level.”
He looked at me, and for a moment his expression brightened, then dimmed again. “That does not signify. I do not consider myself the cleverest of fellows, Christopher. There are many men far more intelligent, and able to speak on matters of importance and interest, much more so than I. Such as my friend Darcy, for example.”
“If I may be so bold to say it, sir. Mr. Darcy may be more able to speak on such matters, but he does not seem to be particularly willing. I have been in his acquaintance a long time, and rarely do I see him speak to anyone but you, or his sister, at much length.”
He let forth a slight laugh and his blue eyes twinkled briefly. “You may be right about that, Christopher. As a result, look where Darcy and I are. Both nearly a quarter century old with no wife to show for it.”
“You are both still very young to be much concerned about that.”
“Well, Darcy may be happy with his state of bachelorhood, but I long to find that girl, that perfect girl who would bring me joy for the rest of my life.”
“There is still plenty of time for that.” I took up a brush and began running it across Camilla’s ebony shoulders.
“You speak as a sage, old soul, Christopher, and yet you are getting to be of the age to be considering the same sort of thing.”
Little did he know how I often entertain those very sorts of thoughts. “No sir,” I replied. “Not I. I’m not quite ready to began on that journey.”
“I suppose not.” He sighed again. “Everyone in their own time.”
I put myself forward once more as I continued to groom the mare. “If you cannot find the lady of your dreams outside your immediate circle, perhaps you should look inward. Mr. Darcy’s sister is a most delightful young lady. I have readied a steed for her to ride more than once when she’s come with her brother to visit you here in London.”
“No, Georgiana is nothing more than a little sister to me. I could never see her as anything else.”
“And what about your unmarried sister for Mr. Darcy?”
He stroked the animal’s mane, the blackness of it a contrast with his own fair hair. “I think she would like that very much, Christopher, but between you and I, I would not wish Caroline on him.”
I laughed aloud, and saw his smile return in earnest. “Then perhaps what you need is a change of scenery altogether. Maybe you should leave London for a while, and find a place endowed with clever young ladies with whom you are not yet acquainted. Fish in a different pond, as the saying goes.”
He looked at me for a while as if deep in thought. “You are a smart lad, Christopher,” he finally said. “I am glad that you have remained in my employ for so long. My father was wise to hire your father, and for him to apprentice you as my groom.”
“That is very kind of you to say, sir.”
“And, you, my dearest fellow, have given me an idea.” With a final pat to Camilla, he wished me goodnight and left the stable with a renewed bounce in his step.

Posted by Georgina at 5:32 PM 2 comments 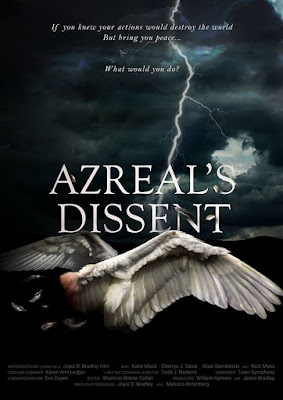 Recently, I was privileged to enjoy a sneak preview of the latest short film, Azreal's Dissent, by up-and-coming director Joyia D. Bradley. I read the script about a year ago, and posted about it then, really excited about the idea of the piece coming to life. Well, now it has, surpassing my expectations, which, albeit, were high. Bradley has managed to bring her script to fruition with all its dark edginess intact, cool special effects to boot.

Here's a summary of the story: Azreal, the Death Angel, is tired of shouldering the world's grief and leaves her position, throwing the whole world off balance. With no deaths taking place for a year, both Michael and Lucifer join forces to fight to save the universe, only to discover an enemy of them both, Lilith, is rising to her destiny.

Each character in the film has a full and interesting personality that the director makes apparent within the seventeen minutes or so of the film's duration. Lucifer is played by Cherrye J. Davis as a sassy, almost business like woman, while her nemesis. Lilith (Alisa Glembotski), comes across as nurturing at first, menacing later, creating an interesting dilemma for the viewer: who do we trust?

Azreal, played by Katie Mack, shows true vulnerability. We sense her connection to this world, her desire to be merely a mortal, to have and keep love. It is, however, when she and her boyfriend decide to celebrate "Miracle Day," the one year anniversary of no deaths in the world, with a recreational drug, that her real identity becomes apparent.

There are some very appealing side characters as well: Lucifer's hound: the three Evils, and the archangel Michael in particular. Costuming adds to each character's appeal, giving a futuristic sway to the movie, while maintaining style and interest.

Some of the sets were amazing, such as a console that Michael uses to view all the beings of the world. It's clear that, in other scenes, Bradley used her creativity to turn normal locations into some really interesting spaces, something that other directors would be hard pressed to do on a limited budget.

The sound effects were good, the music compelling, and over all, it's clear that a really solid group of professionals were responsible for making Azreal's Dissent into something very special. I think we can expect some positive attention for it at the film festivals, and I, for one, will be paying attention to see where this cool little film ends up.
Check out the trailer here:
https://www.facebook.com/AzrealDissent/videos/543260062512763/
And follow Azreal's Dissent on Facebook here: https://www.facebook.com/AzrealDissent/?fref=ts

Posted by Georgina at 1:06 PM 1 comments