The First Three Chapters of The Time Contessa

Please enjoy this sample of the third novel in The Time Mistress Series! 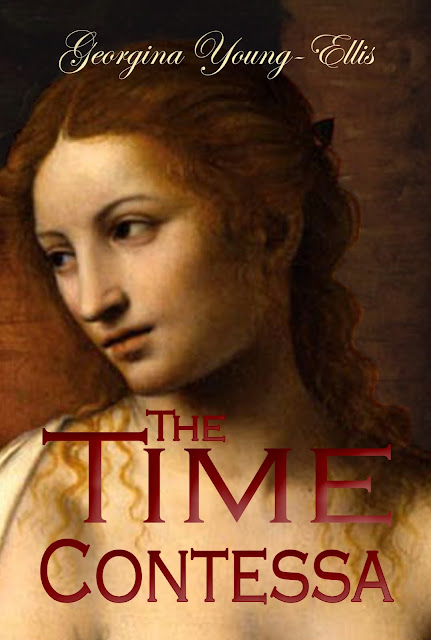 Travel Journal, Jacob Grenefeld, June 12, 1506—I wait for Giuliana on a hillside just outside Firenze. I look out across the landscape: the rolling hills, the patchwork quilt of greens, yellows, browns; olive groves, vineyards, farms. The breeze is warm and as I write, I am almost lulled to sleep. The scent of jasmine is in the air. I wait in the shadow of an oak tree, the trunk so thick that when we sit behind it, we are hidden from anyone passing nearby. This is the only place where we can be alone. We have not made love, for she is a faithful Catholic and will be with no one until she marries. This is my agony. I must return to a far-off world in just a few weeks, a world she can never visit and never understand. She is promised to a man her father has chosen for her, an older man she hasn’t even met. Her marriage to him will unite two wealthy families, one Senese, one Fiorentino. I now understand how the tragedy of Romeo and Juliet came to pass. If Giuliana doesn’t marry this Piero Guerrini, there will be war. So why am I here, under this tree, knowing we can share no more than stolen kisses?
She’s coming. I see her walking toward me along the path from her father’s estate. Her thick, black hair flows out behind her on the air, and the sun catches its auburn highlights. She wears it free, in undulating waves. Her gown is lightweight to suit the weather. Transparent sleeves of silk show her arms, and the low neck exposes the tops of her shoulders and breasts, so full that, even from a distance, I can see they have their own movement, independent of her confident gait. The color of her dress is nearly the same as her skin, tan, faintly golden, because she will not heed her mother’s advice to stay out of the sun. The shape of her long legs is just visible beneath her skirts.
She is almost with me now, and I see, as I glance up from my writing, her mocking smile. She thinks I spend too much time with the little portable set of writing implements I created: quill, ink bottle, and this small, handmade diary. She thinks I am too influenced by Maestro da Vinci. Her large, brown eyes laugh as well. I watch her full, rose-colored lips part to speak my name. She is all fullness and sensuality. My Giuliana. I ache to have you.

Jacob Grenefeld, June 30, 1506—All hell has broken loose! Giuliana’s father found out about us and is raging around Firenze looking for me. Since I’d planned to leave in a few days anyway, I’ve decided to go tonight in order to spare my own hide, but I will have to do it without saying goodbye. I will disappear, and Giuliana will have no idea what happened to me. I suppose she’ll think I took the first boat back to England.
This is what happened: one of the apprentices at da Vinci’s studio, Cesare Bianchi, saw how we looked at each other whenever Giuliana and her father, Signor De Lucca, came in to check on the progress of the painting he commissioned. In order to earn a few extra lire, I imagine, Bianchi told Giuliana’s father about his suspicions, and was paid to follow us. Well, he followed us to the oak tree, and, apparently, hiding somewhere nearby, saw us kiss. Damn him! I knew he was a rat!
I haven’t seen Giuliana since. I only know Signor De Lucca exploded because one of his servants told Maestro da Vinci’s servant, who told da Vinci. Da Vinci counseled me to hide, and when darkness fell, to flee. So, I gathered up my few materials, ran to the inn and got my things; now Maestro da Vinci is keeping me hidden in his home until I can escape tonight. He thinks I will be hiring a horse and riding to the port of Livorno.
I am in agony, sheer and utter agony at leaving my Giuliana like this! I was almost…almost at the point of deciding to stay, or rather of going back and asking permission to stay, having the team replicate several hundred more Florins for me, returning again, and asking her father to let me marry her instead of Piero Guerrini. Now, I have no choice but to leave her with no good-byes, no explanation, not knowing what will become of her in this forced marriage she’s entering into.
I’ve lost my head. She has to marry Guerrini. I’m an idiot for letting myself get so wrapped up in this world that is far too dangerous to consider really being a part of: just last week, I ran away from the spectacle of a man being stabbed in the middle of the Piazza della Signoria. Apparently, it was revenge for dallying with another man’s wife. What am I thinking, getting involved with a woman who is promised to another? Enough now. The sun has set. I must go, though I hate myself for slinking away like a coward. It’s just a short distance to the church of Santa Croce. Pray God I get there without being discovered or De Lucca’s hired thugs will kill me, and this journal will be left for them to read.

Cassandra set the book aside with an involuntarily shudder. It was true; the Italy they would be traveling to the next day was a treacherous time and place. She sat on the balcony of her hotel, overlooking the Campo, the famous, half-shell shaped plaza in the middle of Siena, the city she’d become so familiar with this last month as she and the team had made preparations for the trip. At the moment, the town center was the picture of serenity. The sunset was turning the sky pink and gold, and the buildings around the Campo reflected the glow of the fading sun. The beauty of the city belied its violent history.
She ran her hand across the rough stone of the balcony railing. Though only six hundred years old—young by Siena’s standards—the former palazzo must have seen its share of clashes in the Campo it overlooked.  If she simply focused on the carved stone of the balcony, she could imagine the building as the palace of a wealthy Senese family. The ornate marble lobby she passed through everyday reinforced that truth. But the moment she walked into her modern hotel room, the illusion of the ancient palazzo disappeared.
Anyway, it was more interesting to focus on the view below though it was a benign scene: tourists shuffled into cafes, and the vendors who sold hats and T-shirts in the Campo were beginning to pack up for the night.
A man with long, silver hair caught her eye before he ducked into a restaurant. There was something familiar about him, something that brought Nick to mind. This was not the time to think of that man, the man whom she thought she once loved, the man who had betrayed her when she time-traveled to New York of 1853. He had interfered in the journey, trying to be a hero, but his jealousy had driven him to do a terrible thing.
Bells rang across the plaza, pulling her thoughts back to the present. The Mangia Tower that soared above the Campo still reminded the citizens of the passing of the hours, and the town hall, or Palazzo Pubblico, from which the tower rose, presided as it had for centuries. It was good the team hadn’t built the portal here in the middle of everything. When Jake had traveled to Florence five years ago, he’d taken a huge chance being seen arriving through the portal exit in the small alleyway near Santa Croce, or leaving through it when he’d fled. If anyone had seen him, they would have thought he was some kind of sorcerer, appearing, or disappearing, into thin air. She shook her head. Back then, he’d arrived in Renaissance Florence with a large satchel of clothing, money, and supplies, and was equally lucky he’d made it to a good inn without being robbed or killed.
Cassandra and he had worked hard on perfecting their Italian in the limited preparation time, and traveled the ancient city of Siena through virtual reality tours. Gliding through those streets recreated by VR artists and historians was fun, but their accuracy was limited. When she and Jake saw the city the next day, there were sure to be many surprises. Hopefully, they could navigate the challenges they would encounter, and emerge alive, mission accomplished.

Each January from now on I will choose my favorite nerd-girl of the previous year. What makes the perfect nerd-girl in my mind? First, she should be successful in her nerdiness, not some sad goth queen living in her parents' basement or the go-to wench at a Renaissance fair. She shouldn't  let her love of things nerdy get in the way of being attractive, though that shouldn't be her first priority, and her nerd-look could be anything from bookish to out-there. She should be a stand out in her nerdly field, be it comic book designer, librarian, or Shakespearean actress. And she should be a model for other nerd-girls.

Therefore, after much contemplation, I have chosen as Nerd-Girl of 2012: Tina Fey. 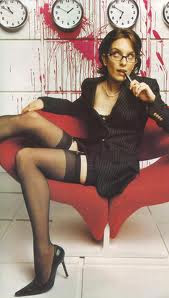 Ms. Fey is a nerd-girl on many levels: actress, (having been one myself for many years I know they are among the nerdiest of all people), writer (enough said) and comedienne (almost all female comedians are ultra-nerdy). A self-professed "Super Nerd," her character on 30 Rock, Liz Lemon, is nerdiness personified.

After honing her craft at Second City in Chicago, a rite of passage for many great comedians, Tina became a writer on Saturday Night Live, ultimately moving up to head writer, performer, and star of Weekend Update. She went on to write and act in films, and created 30 Rock, hands down my favorite comedy show on TV. I'm heart-broken it's coming to an end. She's won boatloads of Emmys and SAG Awards, even a Grammy, and was the youngest recipient ever of the Mark Twain Prize for American Humor.She and Amy Poehler were glorious on the Golden Globes this year, and the two of them were just named ABC News's Persons of the Week, though I'm not sure Diane Sawyer would recognize a nerd if she saw one (perhaps her husband Mike Nichols qualifies).

One of Fey's greatest achievements is that she was, in my opinion, almost single-handedly responsible for winning the 2008 election for Barack Obama. With her uncanny portrayal of Sarah Palin, she showed voters what a true debacle that situation was; especially young voters, who may not have been interested otherwise.

Is she a nerd-girl in the same ways I am? I'm not sure - I'm pretty sure she doesn't write time-travel novels. But then, nerds don't always agree on what makes them nerdy. Yet a nerd, especially a nerd-girl, has a certain undefinable something that Tina definitely has, and which has caused me, after much careful consideration, to choose her as my first Nerd-Girl of the Year. I hope she will accept this honor with due humility. If she decides she wants a plaque, I'll put it in the mail.
Posted by Georgina at 11:56 AM 0 comments