It all started October 29th, 2012, the day Hurricane Sandy hit New York City. It was a frightening twenty-four hours with the wind whipping furiously around our one hundred year old house and the rain coming down savagely. I kept having to remind myself that the house had been standing all those years through many a hurricane and storm, and would probably last through one more. When it was all over, the roof was mostly intact, the rest of the house in good shape, but the slender chokecherry tree in the sidewalk in front was tilting slightly. We shored it up as best we could, and hoped the roots would re-establish themselves. After all, we'd waited a solid year for the city to plant that tree for us after we'd requested it, and it had been growing and flourishing for about five years ever since they did. 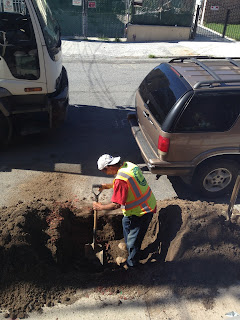 A hard winter came and went, spring arrived and the tree bloomed. The leaves turned green and little hard chokecherries appeared. The summer was hot, and little by little, the leaves started to wither. No amount of water helped. Finally, it became clear the tree was dying. Apparently the roots had been damaged beyond repair during Sandy. We pondered how to get it out of the ground, because it was no small tree anymore. It stood there, basically dead, for two or three months. Then, a van backed into it and took care of the problem for us. A neighbor came by with his chain saw and cut it up, we tied the trunk and branches into a bundle, and waited weeks for the city to come and pick it all up. Then, we went to the 311 website of the city of NY and requested another tree. We were told we were approved, and, it being fall, would receive our tree in the spring of 2014. The spring came and went - no tree. We called and emailed and got our city councilman involved. Everyone apologized and said we'd receive our new tree in the fall. The NYC Parks Dept. came and cleaned out the rectangle where the old tree had been and put down new dirt. We were hopeful. Halloween came - no tree. I called and emailed. It would be planted in November they said. Thanksgiving arrived - no tree. I called and emailed. They said December wasn't too late to plant the tree though it had been well below freezing, and we doubted they would keep their word. Christmas went by - no tree.


One snowy, sub-freezing morning in January, around 7:00 am, a loud banging that rattled the whole house woke us from our sleep. It was coming from the sidewalk in the front. We ran to look out the window, and observed a heavy piece of machinery pounding at the rectangle of dirt, trying to make a hole in the frozen ground. Oh, did I mention it was snowing? Sad, shivering little trees sat on the flat bed of the Parks Dept.'s truck, awaiting a very cold fate. But it was no use. The workers drove away taking the trees with them, leaving the rectangle of (now) mud to continue to collect trash, snow, and dog poo. I called to complain and they said January was a perfectly fine time to plant a tree, though it hadn't turned out to be possible that particular time. A miserable winter came and went. Once spring arrived, I emailed to check on the status of our tree. They promised it would be planted by the end of the spring. April went by. May. We noticed a different city agency was giving away free trees and we went to pick one up, being told we could not plant it in the location where the Parks Dept. tree was designated to be. Now, we were two weeks into June and all faith that we'd get our tree was gone so, in defiance, we planted the other one instead. It was a very small Pagoda Dogwood, and we weren't sure it would make it, but it was better then nothing. The summer solstice dawned. Spring was gone...there was to be no other tree. 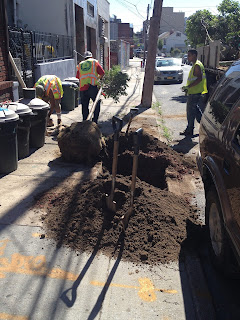 The morning of June 24th I heard a commotion in front of the house. I looked out the window in time to see a big mechanical claw grabbing the Pagoda Dogwood by the roots and flinging it into a dumpster. Over the course of the next half hour or so, various trucks and workers came and cleaned out the old dirt, put down new, dug a hole, and finally, finally, planted a tree. The guy told me it was a cherry tree. Now, there it stands, approximately two years after we'd first requested it, a testimony to the efficiency and reliability of New York City and its various agencies. We've sold our house and are moving to Portland, Oregon in a couple of months where there are lots of trees. I hope the new owners appreciate this one. 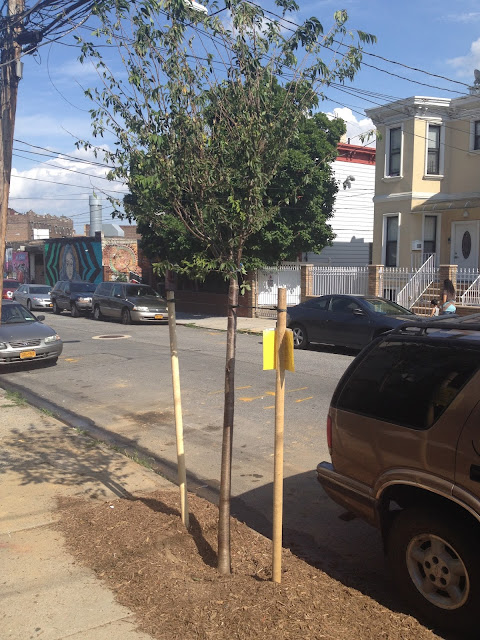 Posted by Georgina at 9:14 AM 0 comments

Re-release of The Time Heiress! 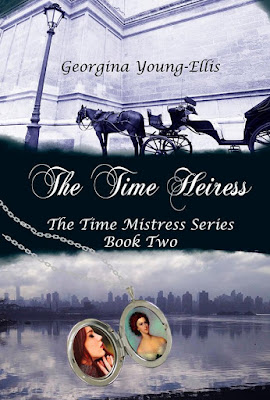 I'm so thrilled to announce the re-release of my second novel, The Time Heiress, with Celestial Waters Publishing/Galaxy Press. Here's the link and picture of the new cover! We've done some really nice edits with this new version, so I hope you'll check it out! The Time Heiress on Amazon
Posted by Georgina at 8:49 AM 2 comments