What Michelle Obama and Cousin Margaret Have in Common 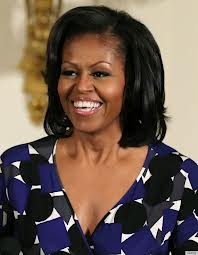 I think my cousin Margaret looks like a white Michelle Obama. Though I don't think Margaret tends to agree, I maintain there's something in the smile that is so very similar, every time I see the first lady, I think of my cousin. For her privacy's sake, I won't post a picture of Margaret here, but just imagine Michelle with very blond hair, blue eyes, lighter skin and there you have it. Funny though, the similarities don't stop there. Margaret is a really special woman in my eyes; like Michelle, her family has always come first though she has one more child than the Obamas, her youngest about a decade older than the first family's youngest. Margaret also has a husband who is at the top of his profession, and, like Michelle, she is proficient in the same field as he, but she's chosen to devote her children's formative years to being there for them. She's encouraged her kids in sports and in the arts and they have flourished in those areas. They're steady and well-adjusted, having benefited from a mom who was supportive without smothering. Margaret believes in fitness and a healthy way of life. She likes gardening. And, I believe, if she were constantly in the public view like Michelle, she'd be practical about style, buy American, be comfortable yet attractive. Her politics tend toward the liberal, but she's no radical. She's a devoted daughter, sister, cousin and niece. Family comes first. You can count on Margaret to be the one of her siblings who will always make the effort to be at weddings, funerals and other important family occasions, even if it means traveling far to do so. She remembers birthdays. She's the person whose calm demeanor makes you want to just hang out with her. She's easy to talk to and fun.

I could probably say many of those same things about Michelle, but of course, I don't know her personally, nor can I be sure she possesses the qualities I sense she shares with Margaret. But I don't think I'm far off. What I do know of how Michelle chooses to raise her family, run her life, and present herself in public, has made her one of the women I admire most in the world. I'd certainly vote for her if she ran for president, but I don't think she would be ambitious in that way. Nor do I think ambition led her to support her husband in his political aspirations; she simply believes in him and wants him to do his job well.

My life is very different from Michelle Obama's, obviously - closer, I suppose to Margaret's. But I'm such a quirky mix of writer, mom, time-travel fanatic, and all the many hobbies and pursuits I enjoy, I'm probably rather different than both of them. Yet I take inspiration from them, quite literally, breathing in, when I can, in their calm strength, their rock-solid values. I'm privileged to know Margaret, maybe someday I'll meet Michelle. I wish for all women at least one role model, like these two, to look up to.