I was supposed to have Meryl Streep's life. Though about ten years younger than her, I was supposed to be the unconventional beauty who was popular in high school, who had the golden career, who won the Academy Awards, who played the meatiest and most challenging roles, managing to have a happy marriage and be a wonderful mother to my children at the same time.


What exactly went wrong? Let's analyze:
#1: I wasn't a cheerleader in high school like Meryl, nor was I very popular. I was a drama nerd who made it through high school thanks to the joy of doing theater in my high school's excellent drama department, and a few fiercely devoted friends.
#2: I didn't go to Yale Drama School like Meryl. Yet I did go to New York University's Tisch Theater Program. For some reason you get all the great contacts at Yale, but not NYU.
#3: I'm not as pretty as Meryl. She may not be what one thinks of as a typical beauty, but she definitely has a certain unidentifiable appeal. I'm not exactly chopped liver, but I'll admit I don't have that special quality she has.
#4: I'm not as talented as Meryl. God, that's hard to admit! Oh, I think I'm a pretty talented actress, just not as talented as she is, and we all know to make it as an actor you need one of two things, and preferably both: supreme good looks and supreme talent. I obviously don't have enough of either.
#5: Ah, finally something we have in common...a good marriage...I'm quite sure mine is as good as Meryl's, maybe better! And, I think I'm an excellent mother though I had only one child, and she has four. I didn't want four, no thank you. 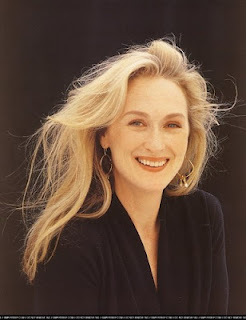 So here's where the whining really starts: I wanted it all, just like she has. I wanted a spectacular acting career, great looks, Academy Awards AND the wonderful husband and family. However, I've moved on. Oh, I'm not saying I wouldn't take a really good part if offered. I just don't pursue them anymore. Now, I just want a brilliant writing career. And guess what? I don't need good looks for this one. I do need talent; whether I have it or not is up to my readers to decide. Fortunately, the thing I most lacked as an actor - drive - is something I have as a writer. This career is falling into place. There may even be a part for Meryl in the film version of one of my time-travel novels. She's a bit too old for the main character who, of course, is a more beautiful and intelligent version of me, but she could play the best friend in the Regency-themed book, the fiery revolutionary mom in the Antebellum-themed book, or one of the feisty friends in the Italian Renaissance-themed book. Goodness knows she can do the accents!

Why does Ms. Streep stir me up so much? When I really think about it, it's a combination of many things. Her acting thrills me. I've seen her on the New York stage twice and each time she just took my breath away. I can't even name all the movie roles in which she made my mouth fall open in astonishment. How she can so totally morph into another human being is almost beyond comprehension. Then, when I see her on a talk show, which is rare, or accepting an award, which is also rare since she's received something like seventeen Oscar nominations but only won three, I realize she's just a lovely, sweet, down to earth person who adores her family much more than her career, or so it seems. So I suppose if anyone was going to have the life I wanted to have, I'd rather it was Meryl.

Posted by Georgina at 7:05 AM 1 comments