Interstellar - Not Just for Nerds 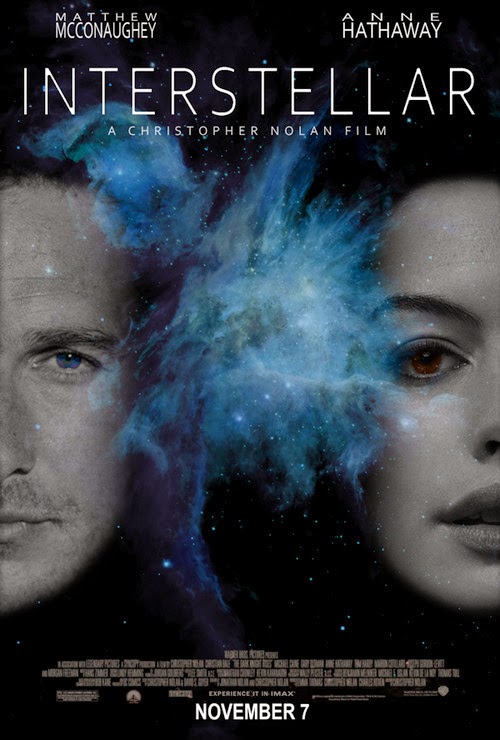 Un-nerd girls and non-sci-fi freaks, don't be scared off by the title and topic of the film Interstellar. Though I might hesitate to recommend it to those friends who violently eschew all things space related, most people will find the spectacular effects, nail biting thrills, and deeply moving, personal story immensely satisfying.

The film begins by depicting our planet in the near future, depleted of the resources needed to support its citizens. To great effect, director Christopher Nolan intercuts actual footage from Ken Burns's documentary, The Dust Bowl, with fictional characters talking about the depletion of soil in America's heartland and the resulting massive dust storms. The people of Earth need solutions, but space travel has been put on the shelf decades ago and is no longer a viable option for finding a new home…or isn't it? Matthew McConaughey stars as a grounded astronaut, who, once presented with the previously discarded possibility of either finding an inhabitable home for the current population of earth, or one where the seeds of new generations can be planted, has no choice but to go with a small, dedicated team of astronauts and one empathetic robot, to evaluate the data of explorers who had gone before looking for life-sustaining planets. To fulfill such a mission, it may be necessary to leave his children with their grandfather, possibly for good. There are too many cinematic secrets within this film to tell more of the plot here, so I won't. But all the wormholes, inadvertent time travel, (something readers of my novels know I'm extremely fond of), and 2001, A Space Odyssey homages, don’t overwhelm the palpable emotion of this film. Oh, you’re gonna cry.

All of the actors, including McConaughey, Anne Hathaway, Jessica Chastain, Casey Affleck, Michael Caine, David Oyelowo, Matt Damon, Topher Grace, John Lithgow, Ellen Burstyn, young Mackenzie Foy and more, are at their finest here. I, personally, had a hard time imagining McConaughey as an astronaut―to me, he’s always kind of a cowboy―but he more than pulls it off. As he proved last year with Dallas Buyers Club, this artist is one to be reckoned with. He and the rest of the cast are simply wonderful.

I’ve heard it said, and have to agree: see Interstellar on the biggest screen possible. Please, for the love of God, don’t watch it on your IPad. If you can see it on IMAX, spring for the pricier ticket and do it. It will immerse you. I haven’t yet seen many of the big films out this fall, but this one is sure to take many, many awards. Opening Friday, November, 7th, get out there and see it.

Posted by Georgina at 7:23 AM 6 comments