Chapter One of A Battle of Wills: Elizabeth, Darcy, and Me - Book 2

Here's a sample from A Battle of Wills. Hope you enjoy! 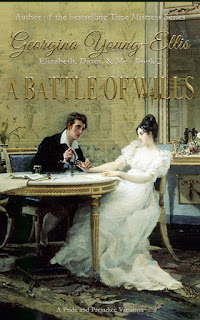 When my dearest Christopher is away, doing his duties as Doctor of the Veterinary Arts, I miss him terribly. At the moment, he has been called to Jane and Charles’s home, Waterston, which is twenty miles north of us. A journey of that distance would require him to stay overnight even if it were a simple case he has gone to see about, but this time it is not, and he may be needed for several days. Charles’s beloved mare, Camilla, is about to foal and Christopher has gone in anticipation of the event because he would not want her to begin her labor without his supervision. She is a most valuable animal, and Charles has bred her with a stallion of equally high pedigree, and so the foal that is to come will be as precious as the both the mother and father. Therefore, I must do without him until Camilla is safely through her ordeal and the foal is deemed to be doing well. It could be just a few days, or a fortnight.
I think about how natural it is for animals to reproduce. I am sure no mare, or cow, or sow ever worry about conceiving, yet it is at the forefront of my concerns. Christopher and I have been married more than a year and I am still not with child. I know that it takes some women time, yet all three of my married sisters have been blessed with little ones—why Lydia already has two! True, they have been married longer than I, but having spent as much time with Jane’s and Lizzy’s babies as I have, I want nothing more than to have my own child, and love and nurture it with all my heart. I know Christopher feels the same way though he tells me to be patient and let nature take its course. What choice do I have?
As I sit writing at my desk, I look up at the small, framed portrait of Christopher that he gave me for our first Christmas together. The artist captured his likeness so well, even the hint of mischievousness in his dark eyes. The curve of his lips, the arch of his brow, the strong bones of his face are all there. Even the way his hair tends to hang slightly over one eye. The only thing missing from the picture is the expression of love with which he regards me. I will always be amazed at how I was so lucky as to find the adoration of such a sweet and clever man.
Very well, enough of my musings. I will now spend an hour working on my latest story, and then an hour practicing upon the lovely pianoforte that was a wedding gift from Jane and Charles. After that, a half an hour studying French, a half an hour with German, and then it will be time to feed the chickens, and check on the cows in their stall, once our young cowherd has brought them in for the evening. I love the warmth of the barn, the smell of the hay, and the gentle, kind presence of the cattle. I can feel that they expect me every evening to give them an extra caress, and an assurance of my affection.
After supper, I will read a little for education, and more for pleasure, before I retire to my bed which will be cold without the body of my love, my life. I do not complain though. He told me to be strong while he is gone, and so I will. Yet nothing can stop me from smelling his pillow as I drift off into sleep.

Posted by Georgina at 1:57 PM 0 comments

Email ThisBlogThis!Share to TwitterShare to FacebookShare to Pinterest
Labels: A Battle of Wills, Darcy and Lizzy, Elizabeth Darcy and Me, JAFF, Jane Austen, Lizzy and Darcy, Mr. Darcy, Pride and Prejudice 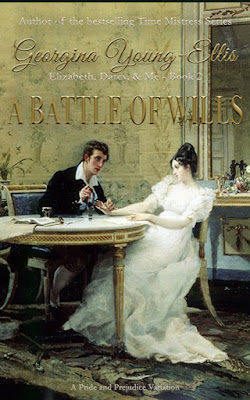 Hi Dearest Readers!
I'll be giving away a free e-copy of A Battle of Wills: Elizabeth, Darcy, and Me - Book 2 on it's release date, September 27th. To enter to win, please leave a comment,  even just a word, on this blog post. The winner will be randomly selected on September 27th, but please remember. if I don't personally know you, or if we're not friends on FB, please make sure I can contact you in case you are the winner. Therefore, you might want to leave your twitter handle, tell me how to find you on FB or, if you don't have either of those and you want to remain anonymous on this site, click the Contact Georgina button on the right, and let me know by email that you entered.

If you haven't read book one, Elizabeth, Darcy, and Me, just click this link to find it on Amazon. You don't really have to have read it to follow book 2, but it helps :)
Best of luck!
Georgina
Posted by Georgina at 2:33 PM 12 comments