I don't know about where you live, but in New York City it's been scorching! Still, I like to think nothing's as hot as my romantic, time-travel trilogy: The Time Mistress Series. From now until August 31st, you can enter to win a signed, print version of book one, The Time Baroness, set in Jane Austen's England. To enter, just go to The Time Baroness Facebook page:
https://www.facebook.com/pages/The-Time-Baroness/142370889164938
"Like" it if you haven't already, and leave a brief comment on the wall - even just a "Hi!" will do.
Only U.S. residents will be eligible. (Sorry to all my international fans!)

All U.S. residents leaving comments between July 21st, 2013 and noon on August 31st, 2013 will be entered in the contest. At 12:00 pm on August 31st, I'll put all the names from the The Time Baroness Facebook wall (those starting on July 21st) into a random selector and pick one. If you're the winner, I'll message you for your address and send the book.

Good luck and have a cool rest of the summer! 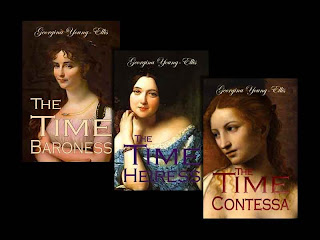