What TV Cooking Shows Tell Us About Ourselves - Guest Post


Mad genius and author of the School of the Ages series offers his insight on cooking shows, the inspiration for his thrilling story from Carnival of Cryptids, An Anthology of Strange and Mysterious Creatures, released February 1st. All proceeds from the sale of the anthology go to charity.

Nerd-girls have certainly been known to indulge in the guilty pleasure of cooking shows - so read on fellow nerd-girls!

What TV Cooking Shows Tell Us About Ourselves
by Matt Posner

We're human. We like to watch other people.
We like competition.
We like celebrities, but we like them to be flawed; we like glamour, but we like human frailty too.
We like, above all, food.
TV cooking shows give us everything. Dramatic contests. Portraits of drive and determination. Overconfident villains, modest heroes, and identifiable just-plain-folks.
TV cooking shows give us a variety of people. There are many nationalities, many styles, many regions represented. The competitors have drama and emotion to share. They have complex stories sometimes -- often, in fact. Most want to start their own restaurants with the prize money, but many are there for pride, or to prove something to their families who have doubted them, or to reunite with distant loved ones. Some are there mainly to prove to themselves that they have recovered from desperate adversities, or to test themselves in the spirit of competition.

On cooking shows, everyone isn't the same, the way they sometimes seem to be in scripted TV (where physiques, hair, clothes are all composed to industry standards). We see white chefs, of course, but we also see blacks, Latinos, and Asians at work. Males and females compete on an equal footing, and the same is true for straight and homosexual people. (Chopped in particular selects many lesbians to compete.) All body types appear, endomorphs and mesomorphs, thin, fat, and in-between. Ages range from very young and fresh-faced to gray with life experience. Hairstyles, everything from baldness to flowing locks to mohawks and dyed spikes.
Whatever these people look like, wherever they come from, whatever their lifestyles away from the kitchen, we can admire and root for them. Where is that more true than on TV cooking shows?
Back to food. Watching a TV cooking show gives us a chance to see cooking techniques demonstrated, including crowd-pleasers ranging from amazing knife-work to pulling strands of sugar into the air. We get insight into the specifics of culinary science, such as how to combine flavors and textures. We learn about ingredients we've never heard of before, from world and regional cuisines. Sometimes these are comical (goat brains) or bizarre (razor clams).  Strange ingredients mixed into standard recipes produce combinations that have never been served before and possibly never will be served again. 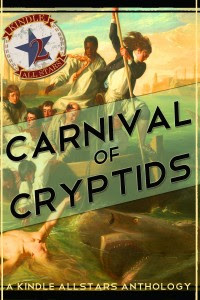 For,  you see, TV cooking shows are great displays of creativity. As much as a singing or dancing competition, TV cooking shows show us people striving to express themselves in striking and impressive ways.  Culinary innovation, coming from people who know what they are doing, is definitely a recipe for high-quality entertainment.
*
My story for Kindle All-Stars 2:  Carnival of Cryptids is about an imaginary "underground TV" cooking contest of the future called "The Paring Knife." With only a judge and a taster, the competitors face danger if they are eliminated, as they are attacked by the knife-wielding "Paring Knife Kids."  Fitting the theme of the anthology, the chefs are cooking creatures from the roster of cryptozoology, all of them apparently robbed of their mystery. Like the chefs I described above, the competitors all have their stories, as do the commentary team, the "official taster," and the sole arbiter, a tyrant known as "Big Poppa Judge." Like a perfect cooking-show recipe, these elements come together in a striking blend of horror and laughter worth the price of the book alone.

But there are many more stories in Carnival of Cryptids. Seven stories by working professional writers of adventure, science fiction, horror, and suspense, selected and introduced by the intense bestselling Bernard Schaffer -- well, you'll like it. All proceeds from sales of the book are donated to National Center for Missing and Exploited Children.