Dad Made me a Nerd 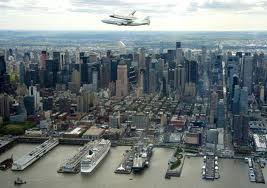 I'm a nerd because of my dad. Not that he tried to make me one; I'm sure he didn't consider himself a nerd at all. But he loved science fiction. He's the reason I was hooked on Star Trek all my life, and so into authors like Ray Bradbury and Arthur C. Clarke. When he met my husband-to-be for the first time, their mutual conversation about sci/fi made them fall more in love with each other than I might have been with either one at the time.

On April 27th, 2012, the space shuttle Enterprise made its historic flight on a 747 around New York City in preparation for its final resting place on the Intrepid Sea, Air, and Space Museum...and I missed it. Fortunately, I've been to NASA. Twice. The first time was with my dad, the second was last summer during part of my family's odyssey around the western United States to memorialize his life. I freakin' love NASA. We got to see the shuttle up close, and everything involved in making the program function. There is an awesome museum at NASA too, (which you can get to only through an annoying child's play center they recently built), where they have all kinds of paraphernalia from the various U.S. space missions: space suits, journals, freeze-dried food packages, and, coolest of the cool, the actual lunar modules that have been on the moon! I remember my dad being glued to every moon landing, even after many people, including me, I suppose, lost interest in them. Years later though, I was thrilled to death to meet Gene Cernan, the last man to walk on the moon.

My dad's as much a hero, as much a larger-than-life personality as any astronaut. He was an intellectual who never stopped learning - a computer geek into his 80s. He wasn't a scientist, but he was really into science. He loved reading about it and watching shows about it - my husband and my son both share that same kind of enthusiasm. Though I'm not as geeky as them, I'm fascinated with many aspects of the scientific world, especially physics, as of late, since I write about time-travel. I nearly flipped when I found out scientists in Switzerland thought they'd broken though the speed of light, the implications of which translate to eventual time-travel, and made me think that perhaps one day I could journey back in time to Jane Austen's England or pre-Civil War NYC, just like in my books. But alas, looks like the experiment wasn't legit. It's funny that of all things to write about, I'd end up incorporating sci-fi into my books, yet because of my dad's influence, it makes sense.

On this first anniversary of my dad's passing, (May 3rd, 2011) I feel a special sense of national pride in the former space shuttle program, the Enterprise craft, named of course after the Star Trek ship, and all the ventures into space that the U.S. made. I wish we had the budget to keep it going; dad would have loved that. But I think I'll make a special trip to the Intrepid to see the Enterprise once it's installed there. In saluting it, I'll salute my dad and his love for the world of science and space. I know he was proud of this particular nerd-girl.
Posted by Georgina at 4:34 PM